Tulips were once prized collectors’ items and status symbols for the Dutch elites.

Tulips were once prized collectors’ items and status symbols for the Dutch elites. Then, “tulip mania” captured the nation, turning bulbs into objects of speculation. Today, they can be found in almost every garden and far beyond the Netherlands’ borders.

“They came from far away in the East and were so rare and beautiful that people lost their senses in wanting to own them. Rich and poor were spending and borrowing money to join the trade in bulbs, which were going up in price all the time.” These are the opening lines of the film Tulip Fever, which launched in 2017. This lavish drama is set in 1636-37 Amsterdam and recalls the historical events that were formative of the Netherlands’ deep involvement with the tulip industry.

Tulips turned from status symbols into objects of speculation. 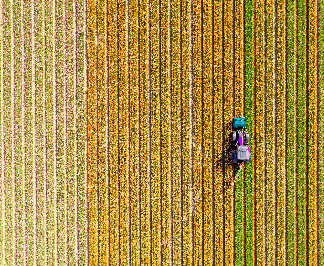 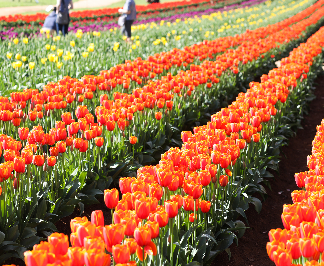 Dutch soil and the mild maritime climate turned out to provide ideal conditions for growing tulips on a large scale.

Treasures from the Sultan’s Gardens

If you spend a spring day cycling between the vast flower fields along the famous “Bollenstreek” which connects the towns of Leiden and Den Helder, you can hardly imagine that tulips were once rare collectors’ items in the Netherlands. In the second half of the 16th century, the first bulbs were brought to this country from the Far Orient. These perennials, which grew wild along the trading routes of the Ottoman Empire, were cultivated as early as 1520 and soon became known as the rulers’ favorite flower. Sultan Suleiman II had his palace decorated with so many tulips that his subjects began calling it the palace of tulips and tears. Even his clothes and the faceplate of his horse’s barding were emblazoned with tulips.

Flowers for the Wealthy

A tulip was probably planted in Dutch soil for the first time by Carolus Clusius, a well-traveled researcher and director of Leiden’s botanical garden, in 1593. The flowers soon became highly sought-after by collectors, especially in the upper classes. They inspired opulent festivities and were included in numerous paintings, such as Rembrandt’s portrait of his wife with a tulip in her hair. Along with a busy trading scene among collectors, commercial trade in tulips expanded rapidly. Wealthy aficionados were willing to pay handsomely for the “blooming gems”. Bulbs of the variety “Semper Augustus” cost around 1,000 gulden apiece in the 1620s – while the average Dutch income was about 150 gulden per year.

This trend culminated during the early 1630s: Tulips turned from status symbols into objects of speculation. Rich and poor alike were trying to make easy money with the popular flower bulbs. Prices exploded, increasing fifty-fold within a few years. A Semper Augustus bulb could change hands for the price of a canal-side house in Amsterdam. But the boom ended as quickly as it had begun: In 1637, the now vast supply put an end to it all; prices dropped and some people lost their entire fortunes overnight. The tulip fever went down in history as the first financial bubble of modern capitalism.

As Far as the Eye Can See

This turn of events did not diminish the popularity of tulips – on the contrary: Dutch soil and the mild maritime climate turned out to provide ideal conditions for growing tulips on a large scale. Over the centuries, they were transformed from a luxury article to an affordable mass product – and one of the Netherlands’ primary exports. 2017 is a record year, as the Netherlands’ tulip production exceeded two billion for the first time – up from one billion ten years ago.

A benign kind of tulip fever still breaks out in the Netherlands each spring. The flowers cover entire landscapes, tulip festivals and parades are held, and the iconic flower is depicted on wine labels, coffee mugs, and neckties.

How to Protect Your Plants In Winter

As the days grow shorter and the first night of frost isn’t far away, your plants need special protection if they are outside.